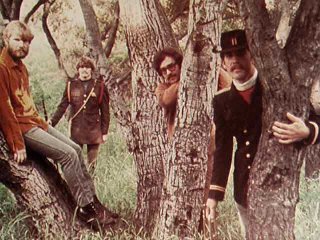 In November 1959, John's older brother, Tom, joined the band. From now on the band calls itself "Tommy Fogerty & The Blue Velvets. "Under this name they released three singles: 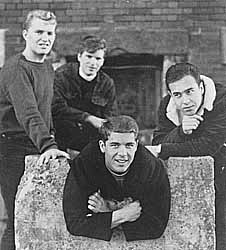 1964 brings the contract with Fantasy Records. The band's new name is: "The Golliwogs." The name-change was decided both unknown to and unwanted by the musicians. The Golliwogs put out a series of singles.

The music is clearly Beatles-influenced sound, at least on the songs composed by Tom. The few songs written by John, on the other hand, already give a flavor of CCR!

Best example: "Brown Eyed Girl" The lucky owners of the original can confirm this.

For all the rest there's the February 1975-released album: "The Golliwogs - Pre Creedence". In November 1967, Saul Zaentz buys Fantasy Records so the four could finally get rid of the unpopular name "The Golliwogs"! On 24 December 1967, "Creedence Clearwater Revival" was founded! 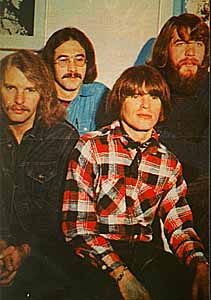 January 1968: Christmas '67 is barely over and CCR signs a new contract with Fantasy. For starters is the single "Porterville/Call It Pretending." "Porterville" is an unchanged Golliwogs title.

In July 1968 it's finally time. The first Creedence Clearwater Revival LP is there: "CREEDENCE CLEARWATER REVIVAL"!

In August, two singles are released simultaneously: Suzie Q P.I/P.II und I Put A Spell On You/Walk On The Water. "Walk On The Water" is a new version of "Walking On The Water" from The Golliwogs! The comparison of the two songs remains undecided for me, but especially shows the musical development from the Beatles-era to CCR's own sound.

By 1972, the following CCR LPs originate:

CCR records the album "Mardi Gras" as a trio, after Tom left the group in February 1971 to start a solo career. Apparently there were some disputes at that point as to John's place as band leader. "Mardi Gras" is released as the "democratic" album. Stu, Doug and John don't just compose the titles on their own, but each composer also sings his own songs.

This rational compromise has two consequences:
1. The CCR-sound, that had become typical from John's work, becomes "watered down",
2. The commercial success of the album is comparatively less.
All this contributes to the break up of CCR on 16 October 1972.
Maybe this is where the roots beneath the dispute over "Creedence Clearwater Revival Revisited" stems from.

For the fans, it is barely understandable why John Fogerty to this day refuses to play with his old band members.

Luckily, the end of "CREEDENCE CLEARWATER REVIVAL" is not the end of this music!

All four musicians have continued their work as soloists or in other bands, since then.

To this day, John Fogerty has let the unforgotten CCR-sound live! But the other three have given the fans loads of great music. Above all, John's brother, Tom, whose interpretation of "Rock 'n' Roll" is at least as interesting and individual as the music from CCR! The Creedence drummer, Doug Clifford, handed over a great solo album "COSMO" before playing in various other bands with bass-man, Stu Cook, and recently founding "Creedence Clearwater Revisited". But that leaves the boundaries of "CCR - Chronicle" and is the topic of "Solo Projects"!